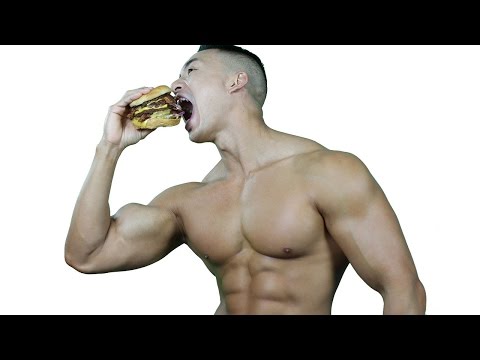 Hey y’all! Coming back at you today with another episode of the MONSTER New Year’s Giveaway…and I’ve got some killer stuff for you today. I’m going to show you the five most common mistakes guys make with their diet when trying to build muscle that prevent them from EVER gaining size. I also show you how to avoid each mistake, and what to do instead so that you get the strong, muscular body you want.

Here’s the breakdown of mistakes for muscle gain.

**1. Not eating enough calories: If you’re not gaining weight, it’s probably because you’re not eating enough. Remember weight training only promotes muscle growth and its the calories that actual puts muscles on the body.

**2. Not eating enough Carbs: Most of people afraid of carbs because of all the fitness fad diets out there claiming that carbs are the #1 cause of fat gain. Not only is this not true, but carbs is actually one of the most important part of muscle growth.

**3 Not pre-cooking your meals in advance. Pre-cooking meals is the key to eating healthy and for muscle growth. For building muscle, we need to eat every two hours or so and without prepared meals… you’ll never have time and the patience to set up the meal at those specific time.

**4 Eating crazy amounts of protein: Your body could only absorb a certain amount of protein, about 1 gram per pound a day. So over eating protein will do you no good, in fact you’ll be so focused on eating protein you’ll end up forgetting to eat carbs.

**5 Permanent bulking: What happens to many guys is that they forget to diet back down after bulking up. With permanent bulking, you’ll end up putting on a lot of size but at the cost of some fat gain and the more fat you gain the harder it takes to burn off. And remember you actually look bigger with a ripped body.

And if you’re serious about building muscle in 2013, I’ve got some GREAT NEWS for you…

On January 7th I’m going to releasing Monster Mass, my new home based workout course to the public. To say “thank you” to my YouTube subscribers, I’m offering a massive discount and some killer free bonuses for the first 1000 guys to sign up for Monster Mass.

The first 1000 guys to sign up will get these bonuses FREE with their order:

– A 14 day supply of Afterburn Fuel, the pre-workout supplement I personally use to build muscle.

– The Monster Mass Diet, a simple yet powerful eating system for gaining muscle

– And the 15 Universal Laws Of Muscle Building, the high-level strategies for getting jacked used by pro bodybuilders and fitness models.

– AND, I’ll be giving the first 1000 guys to sign up a BIG discount on the course (haven’t decided exactly what it is yet, but I’ll announce it soon.)

I’m glad to be able to give back to our YouTube community by giving away all this free stuff to the first 1000 guys to sign up. But unfortunately…there’s a catch!

There are over one MILLION people subscribed to my sixpackshortcuts and insanehomefatloss YouTube channels…so I anticipate that we will sell our of our first 1000 copies fast. And once they’re gone, they’re gone…there’s no way that I can get any more.

So to maximize your chance of getting a discount and the free bonuses, here’s what you need to do:

Of course this does not guarantee completely that you’ll be one of the lucky guys that gets a discount copy of Monster Mass…but it does maximize your chances.

Remember, Monster Mass is my extreme home muscle building course that I personally use to pack on size. You’ll be getting some of my best muscle building products for FREE just for signing up for Monster Mass, including my new pre-workout supplement which isn’t for sale anywhere. And if you miss out on the first 1000 copies, you will lose your discount and you’ll be forced to pay full price when we eventually re-open.

I know that Monster Mass is what you need to finally get the muscular body you want in 2013, and I wish you the best of luck in snagging one of those discount copies. Remember, you need to be at this URL at 6 PM US Central time on Monday, January 7th to claim your discount and free stuff: