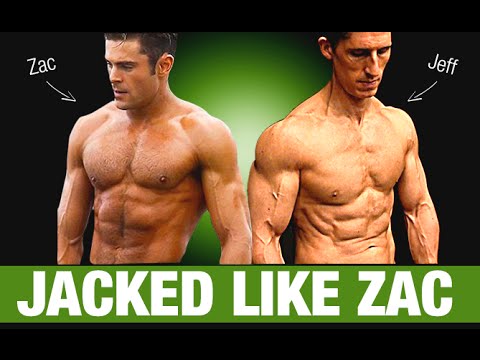 Build ripped muscle like Zac with this program…
http://athleanx.com/x/built-like-zac-year-round

Zac Efron’s workout and diet plan are making waves this Summer because of his incredible physique transformation preparing for Baywatch. Along side the Rock, Zac holds his own, having carved out a chiseled body by focusing on 7 key elements of his training and nutrition. Recently, Men’s Fitness magazine published a story about the gains Efron made to get ready for his Summer comedy role.

In this video, I am breaking down the most important aspects of his diet plan and workouts to help you to start getting better results from your workouts heading into Summer. I’m also going to take a look back at a former “most wanted” celebrity body (that of Taylor Lautner) to see what went wrong and prevented his gains from being permanent.

First and foremost, it is worth noting that neither Zac Efron or Taylor Lautner are heavyweights. Both stand just 5 foot 10 inches tall and weigh no more than 170 pounds. To make his transformation for Baywatch, Efron gained just 10 pounds of lean muscle. The thing is, when you minimize your body fat levels and maximize the amount of muscle your body can naturally carry…you look much bigger than you are. Both of these guys have mastered this.

That said, you can’t expect to look better without being willing to put in some hard work along the way. Zac did just this by adopting more heavy weight training into his workout routine. He stated that he never had lifted very heavy or explosive before preparing for this film. A lot of people actually find themselves in a similar position either because they are uncomfortable lifting heavy or just don’t have the base strength to be able to do it.

By increasing his strength levels on the basic compound lifts, Efron was able to start adding to his muscle density and thickness.

Next he followed a push, pull, legs training split. This workout sequence allows you to train your body more athletically since you train movements instead of individual muscles. The back and biceps are responsible for all lifts in which you pull the weight towards you or pull your body towards a fixed bar. It’s impossible to isolate their actions so it helps to train them together to allow you more recovery time between workouts.

Daily ab training is another key to having the resting tone needed to showcase your abs year round (provided your diet and nutrition are in check). Zac Efron’s diet is also covered here as well. By including a cheat day once in awhile, he is able to maintain his sanity and consistency required to keep his body fat levels low year round.

For a complete workout and nutrition plan to build athletic, ripped muscle like Zac Efron head to http://athleanx.com and get the ATHLEAN-X Training System. Get step by step workouts and a day by day meal plan to take all the guesswork out of your transformation.

For more celebrity workout videos and videos on how guys like Zac Efron build muscle fast, be sure to subscribe to our channel here on youtube at http://youtube.com/user/jdcav24